Recently, the Florida Trust for Historic Preservation announced the inclusion of the MacFarlane Historic District in its 2020 Florida’s 11 to Save, a list of the most threatened historic properties in the state. The program is designed to increase the public’s awareness of the urgent need to save Florida’s historic resources, and to empower local preservationists and preservation groups in their efforts to preserve Florida’s rich history.

“Each year, we receive more and more nominations from people around the state for the 11 to Save program,” said Florida Trust for Historic Preservation Board President Friederike Mittner. “This year’s list does a good job serving our goal to have the list reflect historic places that resonate with the people of Florida, to learn from and share the stories of these special places – and work with communities to make sure they are still here in years to come.”

Around 1882 “Miss Mariah Brown from Eleuthra arrived in Coconut Grove to work with Charles Peacock. She was later followed by a large number of black Bahamians [workers] and before long South Florida’s first black community was born on what is now Charles Avenue,” Arva Parks.

Today, the MacFarlane District is one of a rare example of a black community locally designated and recognized on the National Register of Historic Places. Many Bahamian immigrant laborers, particularly Afro-Bahamians, subsequently built homes there.  The first houses were constructed in 1926 on Frow Avenue, named after one of the Grove’s first permanent settlers.

St. Mary’s Baptist Church, a focal point of the community and the first and only African American church in Coral Gables, was built in 1927. Building permit records indicate that most of the houses within the MacFarlane Homestead subdivision were built between 1926 and 1939. 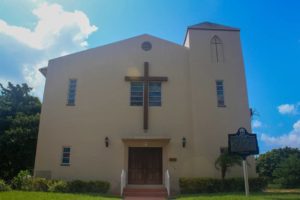 The MacFarlane subdivision, bounded by Oak Avenue on the north, Grand Avenue on the south, Brooker Street on the east, and U.S. 1 on the west, features houses which are vernacular in style, characterized by the use of local materials and without the supervision of professional architects.  These vernacular houses in the MacFarlane development can be divided into two sub-types, the one-story wood or concrete bungalow built between the 1920s and 1930s, and the “shotgun” type house built between the 1930s and 1940s.  The major difference between these two house types is their size: the bungalow is two rooms and the shotgun is one room. 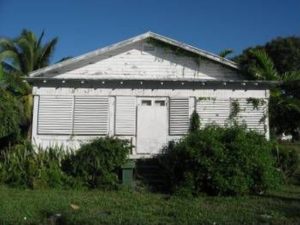 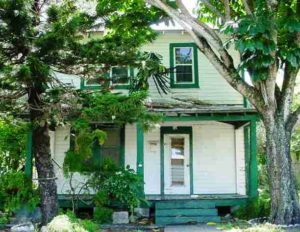 “Originally, 32 residences qualified as contributing properties within the MacFarlane Homestead Historic District when it was locally designated in 1989. The area has survived as a neighborhood of black families, some still living in the original homes built by parents or relatives who settled in the area in the late 1800s from the Bahamas,” observes Karelia Martinez Carbonell, president of the Historic Preservation Association of Coral Gables

George Merrick credited the Bahamians for their influence, inspiration and other valuable knowledge in working with local natural resources such as coral rock, and other tropical materials.  Merrick also recognized the contributions of the Bahamian workers and artisans in helping him develop Coral Gables.  Many years later, Merrick would honor these black Bahamians in a series of stories he entitled “Men of the Magical Isles” [George Merrick, Son of the South Wind, Arva Parks, p. 77] 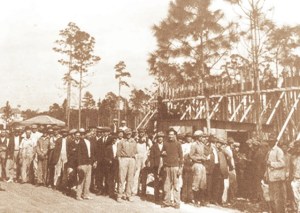 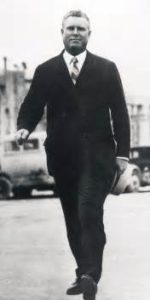 Presently, less than 32 homes survive in the district. Many have been lost to neglect and/or to developers.   The inclusion of the MacFarlane Historic District in the Florida Trust’s 11 to Save is a starting point for the advocacy and education efforts needed to highlight the importance of this historic resource, and is intended to be part of a collaborative effort to identify custom solutions for each property and their preservation.

Recognition goes to the Coral Gables Historical Resources Department and the late Arva Parks for the historical information shared in this article.

The Historic Preservation Association of Coral Gables is a 501c3 non-profit founded in 1991. The Association promotes the understanding of the importance of historic resources and their preservation.  For more information and/or to support the mission of HPACG, please visit www.historiccoralgables.org