Once upon a time in Coral Gables, miles of beautiful White Way streetlights illuminated the plazas, boulevards, and avenues. In preparation for the eight miles of lighting, thirty-five miles of wire were used to install the iron and steel posts erected throughout the city. But, as one Coral Gables advertisement from 1922 stated, “The person who sees the White Way for the first time will appreciate it not for its iron and steel but for its beauty and grandeur.”

Most of the White Way streetlights that made up the eight mile illumination corridor were in the “Arcadian” style. The Arcadian Street Lamp is a one piece cast iron pole weighing approximately two hundred and fifty pounds. They were originally manufactured by the George Cutter Company of South Bend, Indiana from 1907 to 1920 when the company was bought out by Westinghouse.
About one quarter of the lamps in Coral Gables were manufactured by George Cutter. The difference between the Cutter and Westinghouse was in the base access panel. The lamps were originally painted black then later painted silver.

The Arcadians were prevalent throughout the Gables and stood along Alhambra Circle, North Greenway, Granada Boulevard, Coral Way, and Country Club Prado.

The Arcadians had many options of mixing and matching components. Greg Dalkranian, a collector and restorer of vintage streetlights, observes, “Looking at the beauty of these lamps, I would be willing to bet that Denman Fink and George Merrick personally put together the combination of post and globe from the Westinghouse catalog. That is why I call these lamps the Gables Arcadians.”

In 2017, Greg bought five Arcadians with their original Sol-Lux Junior light fixtures. A year later, looking through archival photos of Coral Gables for any sign of Arcadians, he came across a 1925 photo of the historic Coral Gables Country Club. It showed two Arcadians with Westinghouse octagonal junior light fixtures. The Coral Gables Golf and Country Club, and the Granada Golf Course, once the Merrick family’s vegetable field, were part of the original 1921 city plan by George Merrick and landscape architect Frank Button. In 1923, the clubhouse, designed by Hampton & Reimert, became Coral Gables’ first public building. 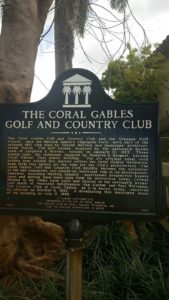 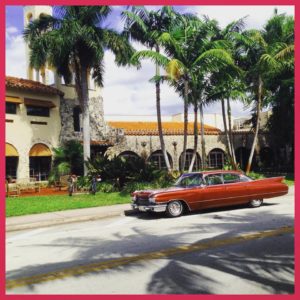 Early last year, when Greg visited the landmarked property in search of the Arcadians, he sadly discovered that the two Arcadian streetlights pictured in the 1925 photo were missing.
In the fall of 2019, Greg decided to present his findings to the Board of Directors of the Historic Preservation Association of Coral Gables [HPACG] in hopes that the organization would support him in bringing back the two Arcadians with the octagonal junior fixtures to their place of origin.
The Board voted unanimously to support Greg’s restoration efforts and pledged to present the opportunity to the Commission at the next possible Commission meeting.

In the meantime, Greg Dalkranian and Karelia Martinez Carbonell met with Vice Mayor Vincent Lago to present the exciting news and request the Vice Mayor’s support of the project. The objective being that HPACG would purchase one Arcadian and the City purchase the other one, thus forming a partnership that would guarantee the return of two original streetlights to the clubhouse.

In November, Vice Mayor sponsored Resolution 19-9389 to address the City’s purchase of the Arcadian. The Commission fully supported the resolution, which passed 5-0.
Presently, the two Arcadians [funded by HPACG and the City of Coral Gables] are being fully restored and should be ready for a ceremonious installation very soon.

Needless to say, HPACG is proud to partner with the City on this unique opportunity to bring back a piece of lost history [or two] to the Coral Gables Country Club, the place where Merrick once stood and addressed the merits of buying into his dream of a city.