Both planners and poets, George Merrick and Richard Blanco meet on Founder’s Day

Both planners and poets, George Merrick and Richard Blanco meet on Founder’s Day

By Karelia Martinez Carbonell, President of the Historic Preservation Association of Coral Gables

The Historic Preservation Association of Coral Gables commemorated the second annual “Founder’s Day” in recognition of George Merrick and his legacy.

The event honored Merrick’s love of poetry with selected readings from his 1920 book “Songs of the Wind on a Southern Shore, and other Poems of Florida.” Poetry readings were presented by poet laureate Richard Blanco to an attentive and appreciative audience. Mr Blanco also read from his own works which included “Perfect City Code” and “The Gulf Motel. The “Motel” poem drew deep emotional connections and a sense of nostalgia for time and place. 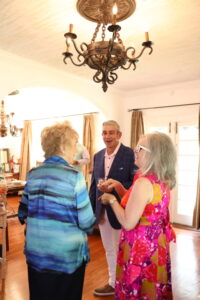 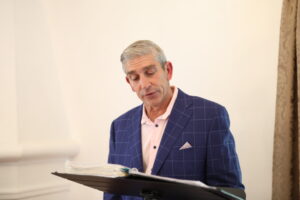 Blanco, who was named Miami-Dade’s first poet laureate in April by County Mayor Daniella Levine Cava, also had the privilege to be the Inaugural Poet at President Obama’s 2013 swearing-in ceremony where he read his poem “One Today.”  During the Founder’s presentation, Blanco revealed an interesting discovery– he and Merrick not only shared a love of poetry but also an affinity for planning cities. Blanco served as city planner for a South Florida municipality for many years before dedicating full time to his poetry.

The poetry ceremony was at the 1920s home of HPACG board member Brett Gillis. The home is lovingly named “Villa Alma” an Old Spanish masterpiece designed by acclaimed architect George Fink, who was knighted by the King of Spain. 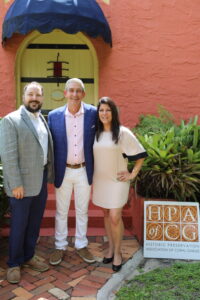 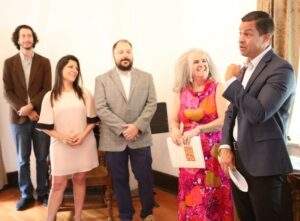 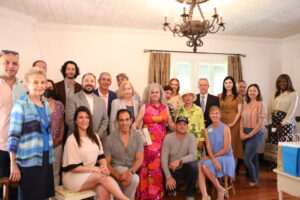 “An intimate number of guests that included number of donors and friends of the organization” [Photo credit: Kelly Martinez]

No longer just any other day, “June 3rd Founder’s Day” is official.

The date is no longer “just any other day…” in Coral Gables. A Resolution unanimously approved by the full Commission in May officially recognizes Merrick’s birthday anniversary each year. 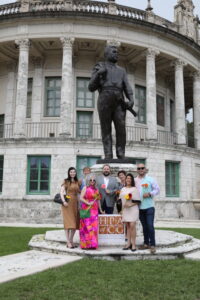 “Until next year!” The traditional gathering around the statue includes flowers for a final homage. [Photo credit: Kelly Martinez]

Building a city did not define him, poetry did.  The ceremony celebrated Merrick’s legacy and his love of words.

George Edgar Merrick wore many hats, but one of his favorites was that of a poet.

On June 3, 1925 [Merrick’s 39th Birthday], during a newspaper interview, Merrick was asked what he wanted to do after he accomplished his “monumental city,” and he responded, “After that I may be able to sit down and do what I have always wanted to do–write.”

The Historic Preservation Association of Coral Gables is a 501c3 non-profit founded in 1991. The Association promotes the understanding of the importance of historic resources and their preservation.  For more information and/or to support the mission of HPACG, please visit www.historiccoralgables.org