Miracle Mile can thrive if its heritage is preserved and promoted

The historic Miracle Mile has struggled with its identity since its inception.

In the 1920s, City founder George Merrick established the business section of Coral Gables and planted seeds for its healthy development. In the 1940s, developers led by George Zain saw the potential for the four-blocks of undeveloped commercial property and began working to create a ‘miracle mile’ as a unique shopping experience. In the 1980s, the historic preservation movement in Coral Gables and the public voiced concern over modern high rises changing the character of the downtown area. In response, a 70 feet (three stories) height restriction was placed on properties fronting the Mile. Forty years later, the area’s historical character is once again threatened.

But what exactly has been gnawing Miracle Mile? One of the top reasons is the total disregard for its heritage by city leaders. The area has been the victim of poor stewardship and its original purpose has been forgotten.

Miracle Mile, according to the historical marker erected years ago is “composed of small boutiques in the heart of the Central Business District and is one of the few remaining developments of its type that has maintained its original purpose and significance in the continental United States.” Sadly, the area’s historical value has been at best largely misunderstood or at worst completely ignored. Either way, it has been a missed economic gain for the City of Coral Gables. 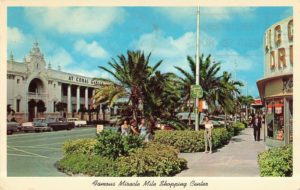 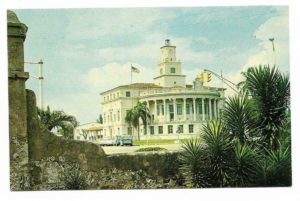 According to a study commissioned by the U.S Chamber of Commerce, American towns that make historic preservation a priority enjoy an economic dividend to the local economy. Additionally, heritage tourism has a greater impact on a local economy with heritage tourists spending 15% more than non-heritage tourists. Small and local businesses often show a preference for locating in historic commercial areas. In study after study, the rate of value increase in historic districts outperforms the market as a whole. As a matter of fact, just recently Miami Beach commissioners proposed creating a heritage business status that would recognize local businesses that meet certain requirements including “contributing to the history or identity of a particular neighborhood or community.”

In contrast, Coral Gables city government continues to follow a pro-development business model. The most recent experiment was spending millions of tax-payer dollars in a streetscape project that failed to revitalize the commercial district.

Years of closed streets has only led to closed shops. Whoever proposed aesthetics over assets missed the big picture and did not understand the economic value of a historic Miracle Mile. Dollars spent removing parking [ironic], widening sidewalks, and adding new paving, did not draw the economic relief so heralded. Neither will a zoning change to allow taller buildings. This proposed zoning change that will allow developers to build up to seven stories on the Mile will irreparably change the historical integrity of the downtown community. Commissioners must consider this before approving the remote parking option.

A mixed-use component has not succeeded in stimulating retail to the area nor will it draw retailers. There is a concept in economics called “revealed preference” – consumers reveal their preference through their economic decisions. According to the U.S. Chamber study, “in cities large and small, consumers prefer living, shopping, visiting, and locating their businesses in historic neighborhoods. That built history in your community is not nostalgia – it is an economic asset.”
Miracle Mile enjoyed its heyday after World War II as a unique shopping destination that is “one of a few still remaining in the continental United States.” This economic asset has been ignored. Recently, elected officials, city administrators, and business leaders have been calling for the modernization of Miracle Mile. This misaligned thinking goes in contrast to the U.S. Chamber’s study that supports making historic preservation an economic priority.

Historic Miracle Mile has been misrepresented for too long. Reimagining the Mile as a historic commercial district offering a unique boutique shopping experience will be good for business. Studies support historic districts outperform the market as a whole. And Miracle Mile can thrive if its heritage is preserved and promoted.

OPINION: Miracle Mile Is Not “Sick” But May Be Suffering From Munchausen’s Syndrome

Miracle Mile Can Thrive if Its Heritage Is Preserved and Promoted

###
The Historic Preservation Association of Coral Gables is a 501c3 non-profit founded in 1991. The Association promotes the understanding of the importance of historic resources and their preservation. For more information, please visit www.historiccoralgables.org