By Karelia Martinez Carbonell, President of the Historic Preservation Association of Coral Gables

A time capsule is a historic cache of goods or information, usually intended to help future generations appreciate the past—and the past meets the present at the 94-year old Peacock-Tyson property—a historic cache worthy of appreciation. The house is one of the earliest examples of Mediterranean Revival architecture in Coral Gables and noteworthy for its high degree of historical integrity thanks to the loving stewardship of its previous owners.

The land on which the house was built was originally part of the Spanish land grant accepted in 1895. By 1912, that land had been transferred from the State of Florida into private hands—the Model Grove Company. By 1914, Merrick had purchased the land calling it the “Coral Gables Extension” and by 1921 began the sale of the lots. 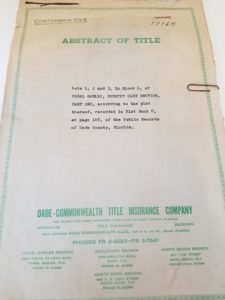 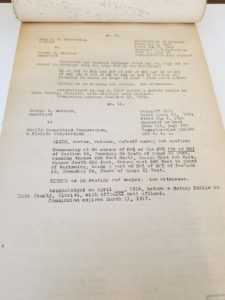 In 1924, the area became part of the Coral Gables Country Club subdivision soon to be home to the Miami-Biltmore Hotel. While promoting the hotel, Merrick took the opportunity to also promote building grand homes along the avenue that would complement the grand hotel. Enter the Peacock-Tyson house. It sits on a half-acre in block 6 of the subdivision, abutting the Miami-Biltmore Golf Course. The position of the lot is on the golf course’s 3rd hole which seamlessly melds with the home’s backyard. Exotic tropical trees and palms envelope the property and offer privacy.

The house’s pedigree has few equals as it is one of the four oldest houses in Coral Gables, the 53rd historical landmark, and the 706th building. It was built in 1926 by prominent architect Harold D. Steward who, with partner Phineas Paist, also designed other local landmarks including Coral Gables City Hall and the Police and Fire Station [repurposed a few years ago as the Coral Gables Museum]. The two-story grand dame is situated on three large lots at the corner of Sevilla and Alhambra, two of the most prominent streets in Coral Gables. Its unique configuration is one of several criteria that make it worthy of its landmark status. The property was given local historic designation in 1984. 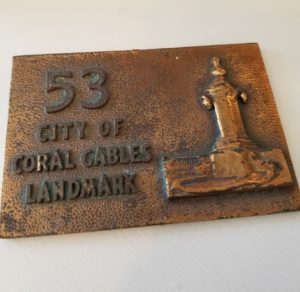 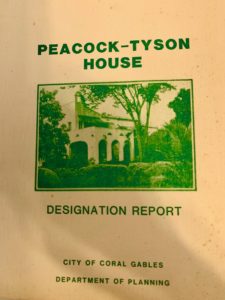 Its arcaded porte-cochere, distinctive fireplace, and bellcote [a small framework and shelter for one or more bells] all embody the marks of a residence whose inspiration is no doubt an estate somewhere in Spain. It is believed, that originally a bell hung in the bellcote. It was rung in coordination with church services at the Church of the Little Flower across the street. In fact, the church dome is one of two prominent landmarks visible from the home’s upstairs master bedroom. The other one is the Miami-Biltmore Hotel.

Wrought iron grilles, balconies, decorative columns, loggias, sculpted fountains, and Cuban tile floors make up distinctive features of the Mediterranean Revival style of architecture of the 1920s and the Peacock-Tyson residence is no exception of homes built during this era. Impeccably preserved Cuban floor tiles adorn the first floor. It is believed that Spanish artisans, hired by George Merrick, introduced the colorful patterns and techniques of the Cuban tile market to Coral Gables. Today, Cuban tiles are a coveted commodity as they are no longer available. Cuban tiles stopped being produced by the late 1950s. 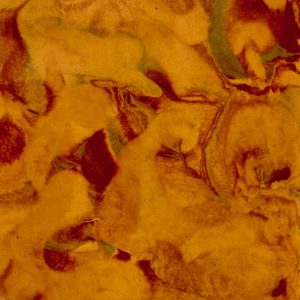 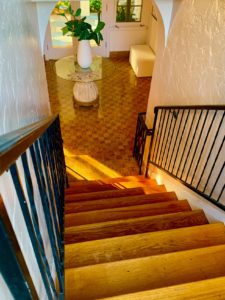 Adorning the roof are original Ludowici architectural terra cotta clay tiles—also with a Cuban provenance. If one looks closely, one cannot miss the “Made in Cuba” stamp etched on the tiles.
Coral rock elements [most probably mined from the local rock quarry that later became the Venetian Pool] have been retained. Also, the kitchen boasts of a working butler’s pantry and whimsical metal knobs grace the cabinets. Wood casement windows with exposed brass hardware are in working order—only needing a good polishing to bring them back to their original luster. The exterior doors are intact and a stunning double entryway leads to a central staircase. There is even a remnant of an old elevator shaft and a “prized seat” so unique that in 1977 it made the pages of the Coral Gables Times/Guide. The “seat,” a favorite of the Tysons, is an elegant wicker commode rescued from the basement of an old Chicago home.

Coral Peacock was the original owner of this extraordinary gem and lived at the residence until 1932. Christiane and Christopher Tyson later occupied the house until their passing—thus the reference to the property as the Peacock-Tyson House.

HPACG members were invited to a private tour of the Tyson-Peacock home at 1498 Sevilla first time open in 63 years. One thing is for sure, the home is a historic cache of utmost importance.
Recognition goes to the Coral Gables Historical Resources Department and Ellen J. Uguccioni, Architectural Historian, for the historical information shared in this article.